Geniuses Founded this Country, Idiots are Running It 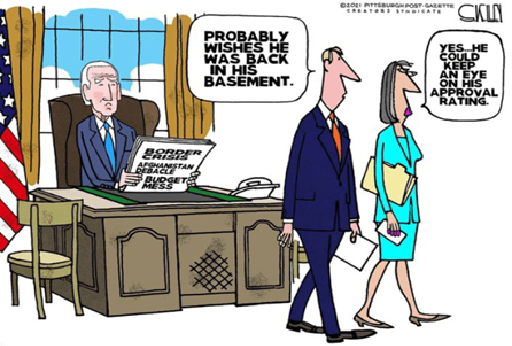 Biden’s approval ratings are falling ten times faster than the Times Square crystal ball on New Year’s Eve.  I really try to keep you informed of all events that are contributing to this train wreck, but they are coming fast and furious.  I simply cannot keep pace.

It seems like every day we are being confronted by another Branden administration mandate, policy decision, or proposal that will unquestionably have a negative impact on America, while at the same time promoting his socialistic agenda.  The second problem we have is an e-mail supply chain problem.  We are working on it.

Before diving into the details, I would like to note that much of the polling data is provided by the North Carolina State GOP.  Brandon’s policies are creating disaster at home and abroad.  Somehow, he has managed to botch every major challenge he has faced.  So, let’s look at what the various sectors of America think about the situation that Biden has been able to achieve in just a short nine months.  Unfortunately, the data does not illuminate the number of Americans suffering from voters’ remorse, but you know thousands, perhaps millions, are included in these survey responses.

The above data, gleaned from multiple recent surveys, is very revealing.  The data point that puzzles me the most is the 38% of voter who believe the country is headed in the right direction.  It is extremely difficult how anyone who has been watching and/or listening can truly believe this.  The only explanation I can come to is there must be more Americans embracing the concept of an authoritarian socialist government than most of us would have predicted.  It is very sad that so many Americans feel that they need a government to inform them what they can do and not do, what they can say and not say, and what they can believe and not believe.  Let’s look at the past ten months of Biden successes as viewed by 38% so firmly believing this is the “right direction.”

The Case for Letting Brandon Go

As stated above inflation is having a negative impact on 70% of Americans. Gas is over $1 per gallon higher than it was a year ago.  In some states gas prices are now approaching $8 per gallon. Food has increased by as much as 25% in some states, housing has increased on average of 30%.  Most economists agree on a few key points; there is a danger that America is headed towards a recession, contrary to Biden’s messaging, inflation is not going to end anytime soon. The two proposed bills totaling almost $4 trillion, earmarked primarily for his socialist agenda is only going to further fuel the flames of the inflationary rate.  Okay, now I get it.  We have identified three of the 38%; Soros, Bezos, and Gates.  To help you understand the differences in economic terms, a recession is when your neighbor loses their job, a depression is when you lose your job and recovery is when Fauci loses his job.

Parents across the entire country have been extremely vocal in opposing curriculum being taught to their children.  Parents have been most concerned about CRT, promotion gender self-identification, and vaccine mandates.  Lt. Gov Robinson has identified very graphic sexual content being shared with very young students as “filth”.  Several members of this 38% called for his resignation. The group representing the Boards of Education across America collaborated with the White House to investigate parents, who are pushing back against some of the 38% who occupy seats on these Boards, as “domestic terrorists”.  What we have witnessed right here in our back yard is our Board of Education Members can lie to you just as easily as Jen Psaki during one of her press conferences and have no problem infringing on your right to freedom of speech.  It has been proven time after time that CRT is being taught in almost every school in America.  Did you see what the courageous folks in Virginia did to put an end to the liberal attempts to indoctrinate their children.

Much has been written about the colossal failure known as the end to the Afghan War.  What has not been talked about is the hundreds of Americans abandoned in a terrorist-controlled nation.  Biden pledged that no American would be left behind.  As the dust settled on the biggest military failure in American history, the Biden administration announced that approximately 100 Americans remained in Afghanistan.  Recently the Defense department adjusted those numbers to over 400 Americans are currently in Afghanistan.  Americans cannot forget and must continue to be outraged.

First we can no longer label this a border.  This area should be renamed to the landmass that meets the Mexican land mass.  Illegals from over 101 different countries are streaming across the border daily.  Coming across are human traffickers, gang members, known felons, drug traffickers, economic migrants, many with disease, untested for COVID and all quickly being relocated, often during the dark of night to locations all over America.  Did you know that 90,000 Americans die each year from Fentanyl overdoses?  This is a drug manufactured in China and is the drug of choice to cross this geographic area.

Just quickly, the following are also failures that I am sure many of you are familiar:

You Can Be the Answer

In closing, there is one important lesson we learned from the recent elections held in the Commonwealth of Virginia.  If we stand united, if we increase the number of voices to be heard, if we speak with one united voice, and we commit to join to do what is necessary, we will take back our Country, we will save America and we will restore America First Agenda.  I ask that you become a part of this important movement.  Here is what you can do now: