The Truth About Build Back Better 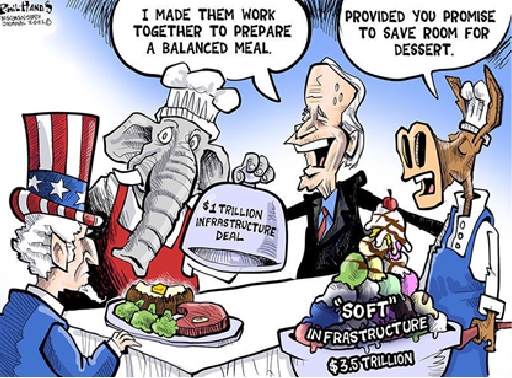 3.5 Trillion Reasons You Must Read!

Before we dive into the Democrats’ proposed socialism for all plan, one that will guarantee the destruction of America, we ask why Americans aren’t more outraged by this proposal?  If ever there was a time to stand together, voice our opposition, and do everything possible to save America- the time is now.  At the end of the day, we all must say “we did everything possible.”  The words of Haile Selassie say it best, “Throughout history, it has been the inaction of those who could have acted; the indifference of those who should have known better; the silence of the voice of justice when it mattered most; that has made it possible for evil to triumph.”

It is almost impossible to believe that a reported 50 percent of Americans support the “Zero Cost”, $3.5 trillion socialist doctrine, also known as the Build Back Better (BBB) Plan.  This only proves one or more of the following:

It does not take a rocket scientist, or better yet, the smartest economist and historian to forecast what future America will look like if the BBB bill is passed.

While we have already stated our surprise in learning that 50 percent of Americans support the BBB socialist doctrine; it is even more difficult to believe that 48 educated and informed United States Senators are eagerly willing to throw our Constitution out the window and negatively transform the Country our Founding Fathers laid the foundation, and many have died to build, preserve, and protect.

Before we highlight several of the line items in the BBB doctrine let’s explore some possibilities why there is not a loud and united coalition of Americans that are voicing their strong opposition to such a clearly damaging proposition being proposed by the left and considered by the left and not so far left legislators.  There is not one sane or even insane politician on the planet today or perhaps in history that would knowingly make the decisions that Biden has in the past nine months.  Presidents are aware when their approval rating drops into the mid-thirties.  Even Biden knows but plows ahead.  You must ask yourself the question; why would a President all but hand the opposing party gift-wrapped assurances they will win future elections? Before we help you explore answers to this question, let’s look at some examples of the divisive, unbelievable, and ridiculous actions that Biden or his puppet master has taken:

The Democrats want you to believe that the Build Back Better or Human Infrastructure Bill will correct all these self-imposed catastrophic missteps.  We hope you understand how ridiculous that statement is.  They want to spend $4.3T and tax small businesses and hardworking citizens $2.9 trillion over the next 10 years to fix problems they have created.  There is a much better way to solve this problem, simply replace them.  This option really does cost zero.

Indiana Congressman Banks (R) and his staff have done a thorough review of the 2400-page BBB plan.  The following are what Congressman Banks recently shared about BBB in his article “Mind-blowingly corrupt’: GOP congressman outlines ‘worst’ parts of $3.5T spending bill”.  Congressman banks have identified forty-two mind-blowing and corrupt proposals in the BBB bill, but in the interest of brevity we share only the following:

In response to the question, why aren’t more Americans concerned?  Could it be that the Administration wants your full attention to be directed toward education, immigration, inflation, supply chain shortages, COVID, vaccines, masks, Afghanistan, pending energy crisis, Christmas canceled, etc. while they are slowly pushing that football known as BBB across the goal line?

In closing, hopefully, this article has inspired you to ask what can I do as an American to help save our Country? Congressman Banks probably said it best.  We need to loudly oppose it. Democrats are scattered. The Biden agenda is in question. It’s the perfect opportunity to build public sentiment against this bill.  It’s not an understatement to say this bill, if passed, will fundamentally change our country forever — Americans will wake up in a few years and wonder what happened to their freedom. We can’t let that happen.

Here is what else you can do:

We also want to invite you to attend the next NHC GOP County Meeting.  The meeting will be held on October 28th, starting at 6:30 PM is a meet and greet, the meeting starts at 7:00 PM.  The location is the Spring Hill Baptist Church Reception Hall, 801 N. College Road, Wilmington 28405