A DISASTER ENTIRELY OF BIDEN’S MAKING 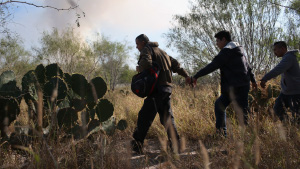 A DISASTER ENTIRELY OF BIDEN’S MAKING

A recent article released by Byron York’s Daily Memo Newsletter from the Conservative Source America Deserve informs us about the “Disaster Biden has created on the border”. Even though we in North Carolina are far from the chaos at the Southern Border, it is almost assured this will have an undesired impact on North Carolina and New Hanover County.

“The more we learn about the true dimensions of the crisis at the U.S.-Mexico border, the worse it is. Now, this new report says that in the last few months U.S. authorities have encountered illegal border crossers not just from Mexico, or the Northern Triangle countries, but from 160 nations around the globe. People are coming to Mexico from the most distant spots on the planet to cross illegally into the United States, confident that President Joe Biden will let them stay. And Biden is doing just that.

“More than 12,500 Ecuadoreans were encountered in March, up from 3,568 in January, “The New York Times”. “Nearly 4,000 Brazilians and more than 3,500 Venezuelans were intercepted, up from just 300 and 284, respectively, in January. The numbers in coming months are expected to be higher.” And then there are the migrants coming from India and Asia.

“Many of them are entering the United States through wide openings in the border wall near Yuma, Arizona, sparing them from the risky routes through remote desert regions,” and avoiding the walls that President Trump built. This article goes on to explain “The situation is absolutely, completely, 100 percent Joe Biden’s fault. Yes, it is what many Democrats wanted. It is what many activists and commentators wanted. For that matter, it is what the New York Times editorial board wanted. But the fact is, it would not happen without the President of the United States making it happen. The president could order border officials under his authority to enforce the law and turn away those who have no legal right to enter the United States other than at a port of entry. But Biden does just the opposite. The president is not trying to stop the flow of illegal crossers. Instead, he is trying to accommodate the flow, scrambling to find housing and living arrangements for those coming in. The message has gotten out to the world, and the world is coming.”

What does this mean to you and what can you do?

To add to the flow of thousands of illegal immigrants, many caught and many not, the flow of drugs into the United States has reached record highs. Fox News recently reported that in one load of Fentanyl intercepted at the border it was of sufficient quantity to kill every person living in the state of New York. Any guesses where Fentanyl is manufactured? If you said China, you are correct. The Border chaos will have a huge impact on every American citizen. Biden just recently proposed a reallocation of $2.2 Billion to the Border to pay for illegal’s housing needs. Who pays? You do as an American taxpayer. The Border is not the only crisis that has generated absolute chaos, death, and destruction in the past 130 days of the Biden administration. Hamas continues to lob hundreds of rockets into Israel and many members of the liberal left have sided with the terrorist group Hamas against one of our strongest allies in the Mideast.

We are busy keeping you informed of this administration’s actions that are having a profound negative impact on most American Citizens. Please visit our website to read this entire article and many more like it. It is critical that we continue to grow the number of members on our team. We hope you will consider becoming a member of our TEAM as we continue to present you true and factual information.

Please share this post with family, friends, neighbors and help us make our voice heard from Wilmington to Washington.