Time to Call “BS” on Build Back Better 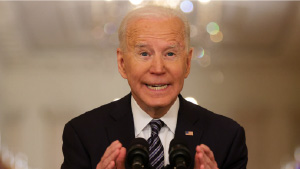 Today we are going to share many of the unbelievable line items the Democrats have labeled “Human Infrastructure” within their “Build Back Better” budget proposal.  Before we dive deeper into the 2,400-page document; there is one proposal that deserves your full and immediate attention.  As part of this proposal, the Biden administration has made clear its plan to beef up IRS auditing by expanding the agency’s funding and power. Biden’s latest proposal would require banks to turn over to the Internal Revenue Service bank account information for all accounts holding more than $600.  Under this plan, the IRS will hire 8,000 agents to monitor all bank transactions of $600 or more.  Anytime a deposit or debit is made to your savings or checking accounts, the bank will be required to report this information to the IRS.  This is clearly a violation of your privacy, it raises numerous security concerns, we don’t know what the IRS will do with this additional personal information, and is another blatant overreach by this administration.  Think about this, over 80 percent of American’s pay $600 or more just for rent or mortgage payments.

While the proposal to monitor your banking activity is perhaps the most egregious line item in the $ 3.5 Trillion “BBB” legislation there are several more that deserve your attention.  The following was taken from the North Carolina State GOP weekly “Party Pack”.

Biden continues to nudge America toward the progressive left-wing radical’s goal of becoming an authoritarian socialist hell.  Your freedoms are under attack via mandates, and now a proposal to electronically monitor your bank accounts and your purchases.  The right to privacy afforded by the Constitution is being eroded. The Fourth Amendment explicitly affirms the “right of the people to be secure in their persons, houses, papers, and effects, against unreasonable searches and seizures”.

What can you do today to stop the Biden administration from implementing socialist ideology, eroding national security, and attacking your rights afforded under our Constitution?

We also want to invite you to attend the next GOP County Meeting.  The meeting will be held on October 28th, starting at 6:30 PM is a meet and greet, the meeting starts at 7:00 PM.  The location is the Spring Hill Baptist Church Reception Hall, 801 N. College Road, Wilmington 28405.

One final thing.  Early voting for the Municipal election begins on October 14 and ends on October 30.  Election Day is November 2nd.  If you reside in the Wilmington City limits, we urge you to vote.  Your vote is your voice.  Please vote for your conservative candidates; Jonathan Uzcategui, Luke Waddell, Charlie Rivenbark.  We also support Incumbent Mayor Bill Saffo.