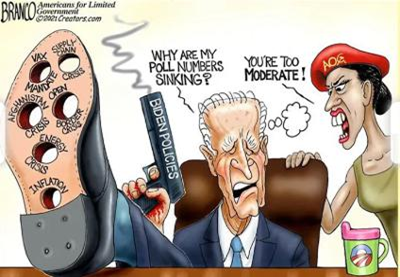 First, I want to be clear, I am not labeling our readers as dummies.  My objective is for us to take a more critical look at all the unbelievable, crazy, chaotic mandates, policies, and proposed legislation that is being generated by the socialist left-wing progressive nuts in Washington, as well as liberal Governors and Mayors of blue states and cities. And, then attempt to find “the root cause(s)” of this ineptness.  You must read on to get to the “dummy” part.

Since I shared the Biden polling data with you a few days ago, the numbers have gone down even further.  Numerous political polls are currently revealing Biden’s approval rating is at 38%.  Not so surprising, Vice President Harris’ approval rating is 28%.  This is a record low for any Vice President in our history.  Sixty-four percent of Americans do not want Biden to run for re-election.  Thirty-five percent of Democrats do not want Biden to be a 2024 candidate.  Given everything we have witnessed in the first 10 months of the Biden administration, you would probably think the 38% approval rating is too high.  I agree, but there is a reasonable explanation. Included in the polling data is input from the States of New York, New Jersey, Illinois, California, Washington, and Oregon.  To be honest, I am not sure what it would take for these liberal bastions to become dissatisfied with the direction America is headed.  It is becoming obvious that the Biden administration is not concerned with approval ratings.  The swamp creatures only continue to make decisions that only exacerbate the future of America.  Why would they be so tone-deaf to the feedback American Citizens are clearly providing?

Let’s take a close look at the policies and mandates that have led to this polling data.  In the word of Jen Psaki, “I will circle back” and provide you with what many well-informed individuals offer as reasons to a government gone wild; bad decision after bad decision and another bad decision that only makes a previous bad decision worse.

CRT – Critical race theory being taught in public schools across America has been a major concern of parents since the beginning of the Biden Administration.  CRT is now a term that encompasses a wide array of anti-white, anti-wealthy, white supremacy, liberal defined equity, and equality, pro-gender self-identification, anti-history, etc. American parents have demonstrated great resolve and courage in standing strong against the Boards of Education across America.  While the liberals continue to deny CRT is being taught in our schools (this deserves 50 Pinocchio’s), the Biden administration has encouraged the U.S. DOJ to monitor Board meetings and potentially charge concerned parents as “domestic terrorists”.  This is adding a bad decision on top of another bad decision.  Even after the Democrats’ colossal failure in Virginia, you have not heard Biden address this issue and try to correct an obvious wrong.  Conservatives support the core curriculum, (math, science, reading, advanced courses) be the focus on education in America.  We also support that the tax dollars that fund the educational institutions, fund the student and parents could use those funds in any manner they desire.

Inflation – Not to diminish the impacts of CRT on the Virginia election results; inflation was the number one concern identified during the exit poll surveys.  Inflation is currently higher than it has been in the past 30 years.  Not to go into a lot of inflationary details, gas prices are higher than they have been since the late 1970s.  For several reasons, this will only get worse.  Biden has shut down supply gas and oil pipelines and is considering shutting down the gas pipeline from Canada to Michigan.   The Biden administration clearly realizes that oil prices are going through the roof but is considering the shutdown of more supply lines.  Does this make sense to anyone, even members of that 38%?  Numerous non-partisan economists have theorized that Biden’s economic decisions can only be explained by the left’s desire to drive up prices to make Americans more dependent on government.  The Conservative position on this is simple.  We go back to the America First agenda that resulted in not only being energy independent, but also an exporter of energy.

Afghanistan Catastrophe: Without repeating the information we have previously shared on this topic, Biden’s leadership and decision-making will go down as one of the greatest military failures in American History.  There were numerous decisions we can point to that contributed to the death of our brave service members and the abandonment of hundreds of American Citizens.  However, I want to focus on what many see as a trend.  Fact, Biden decided to withdraw our military presence before withdrawing the defenseless civilians.  Fact, Biden is making decisions now that are clearly driving up oil and gas prices, before the fleet of electric vehicles crowd our roadways.  Even more troubling how will power be generated to recharge this fleet of cars.  We are headed toward dead batteries in electric vehicles and no fuel to power gasoline engines.  We don’t think for one minute that every member of the Biden administration is ill equipped to make a logical decision.  This only begs the question of who and why would make decisions that an eleventh graders could quickly identify as ridiculous?  Another question for you.  Have you heard Biden or members of his administration further comment on the Americans trapped in a terrorist governed country?  This is just more bad decisions making previous bad decisions even worse.  The Afghan debacle has only empowered, China, Russia, Iran and North Korea. Conservatives support funding to promote a strong National Defense, military leaders who are leaders, analyst, decision makers and strategist and not politicians, book writers, openly opinionated and self-serving.

Immigration and the Southern Border: All I can say about the way Biden and Harris have handled the illegal immigration issue at the border is UNBELIEVABLE!  Here is what we know is happening today: 1.75 million illegals have entered the US as of Nov, 2021, many are being relocated to various states in the dark hours of night, one replaced illegal murdered a woman in Florida, child abuse is occurring, sex trafficking is occurring, opioids and fentanyl is entered at unprecedented rate, 90,000 Americans die each year from fentanyl overdoses, CBP agents are being identified as raciest for correctly enforcing laws, etc.  Here is what the Biden administration has considered or is considering addressing the illegal migrant issue: free junior college for illegal migrants, Medicaid for illegal migrants, Amnesty and a pathway to citizenship, $450 thousand dollars to individuals who had families separated as they crossed the border illegally.  When explaining this $450K give away Biden is always quick to point out these families were separated under the previous administration (Trump). What you won’t hear from Biden, or the liberal media is President Barack Obama separated parents from their children at the border. Obama prosecuted mothers for coming to the United States illegally. He fast tracked deportations. And yes, he housed unaccompanied children in tent cities.  I really don’t need to point out that Biden’s inaction at the border is a colossal failure in leadership.  What I do need to point out is Biden’s approval ratings are in the teens when it comes to his handling of the border.  Do you think all these add-ons are going to improve those ratings?  One final thought on this topic, President Biden has already failed to uphold the oath of office when being sworn in back in January.  Laws such as immigration laws passed by previous Congresses don’t have an expiration date. They should be fully enforced until such time they are either repealed or amended. Conservatives believe and promote secure borders, legalized pathways to entry to the U.S. and following the legal processes in becoming an American Citizen.

Build Back Better and Infrastructure Bill:  The Infrastructure Bill was recently approved by Congress, but only with the assistance of 13 (“lame duck”) House Republicans.  Although there is nothing that can be said to reverse the Infrastructure Bill’s passing, I must share with you a few earmarked items in this Bill: Racial Highway Deconstruct, Tree equity, $21 billion for environment, $11 billion for safety, $7.5 billion for charging stations (less than 2% of vehicles on the road in American are electric), $7.5 billion for electric school buses.  President Trump’s fact-finding team has stated that less than 11% of the items contained in the bill are true infrastructure.  The Build Back Better bill is the one we must be most concerned. It is the largest socialist spending bill in the History of America.  It would require at least 30 additional pages to explain all that is in this bill, but here are some of the most concerning:

It should go without saying, but Conservatives do not support any part of this bill.  Conservatives believe and promote small government, fewer regulations, citizens rights, funding national defense, parents decide what children are taught, etc.

I am going to attempt to sum this up in as few as words as possible. Most Presidents would have been impeached for any one of these actions, Biden is responsible for all of them.  Most Americans think that we have an elderly gentleman who has difficulty delivering a comprehensible statement without the aid of a teleprompter.  Most Americans thinks that Biden and Harris are not aware of their approval ratings.  Most Americans would assume that if they were aware, corrective action would be taken, the Whitehouse would address these issues by confronting the American public and media, in stead of turning their backs and walking off stage.

There have been hundreds of articles written by world renown non-partisan experts that explain the current administrations behavior as one that is following the road map to creating a 100% socialistic nation.  They have one year remaining to do as much damage as possible.  The actions being taken by this administration mirrors the plans that were introduced in Chian, and Venezuela.  The plan is simple; create chaos, drive up prices, implement social programs, reduce availability of goods and services, expand the size of government to the point that every citizen becomes reliant on government for their basic needs.

If we believe there is not a larger objective being executed by the liberal socialist left, then we are the potential dummies.  If we sit back and do nothing, then there is no question, we are the dummies.

At the end of my articles, I usually ask the question, what can you do now?  I then list some options, visit our website, volunteer, contribute, etc.  This article is too important to do that now.

There is only one thing you should consider doing.  It is critical that we contact all Senators and House Representatives (especially the 13 Republican infrastructure supporters and all of the more moderate democrats).  We definitely need to reach out to Senators Manchin and Sinema.

I have offered this before, and I offer now to draft letters and/or emails for you to send.  Simply contact me.