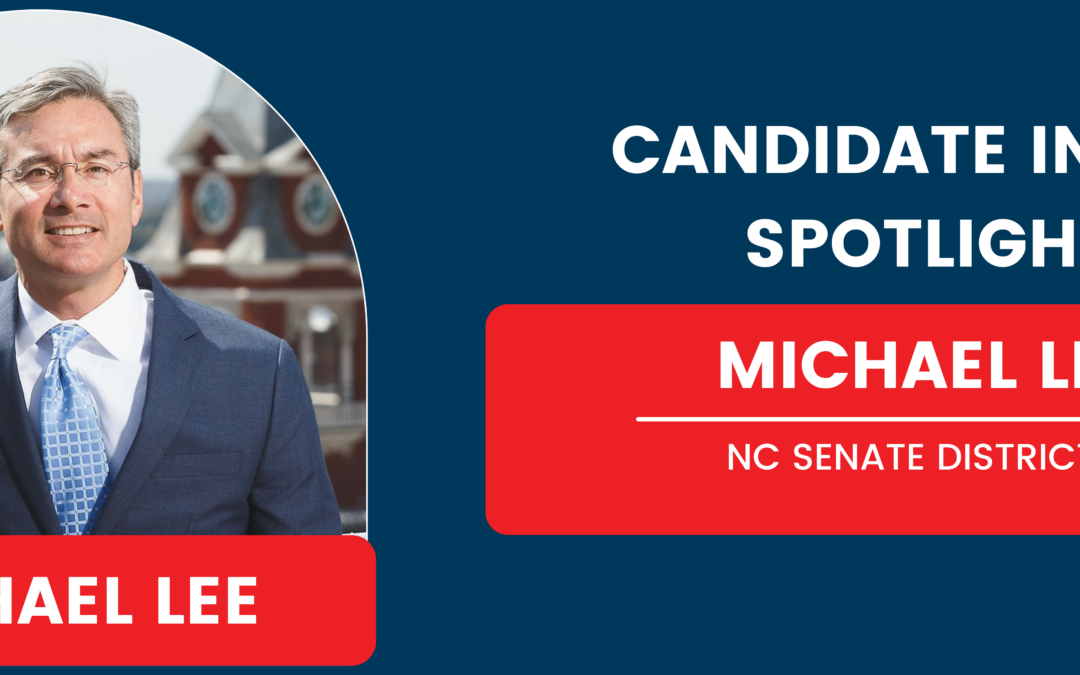 The NHC GOP is honored and proud to share with you examples of the accomplishments achieved by Senator Lee while serving in the NC Senate. Not only has he done an amazing job, but he also has keen insights to address the damages that have occurred to NC in the past couple of years.
Michael graduated from University of North Carolina at Chapel Hill, B.A. 1991 and received a law degree from Wake Forest University School of Law, J.D., cum laude, 1997. He founded Lee Kaess, PLLC in 2012 which has expanded to include attorneys in Wilmington, Raleigh and Dallas, Texas, working in commercial real estate, trusts and estates, land use and litigation. He is married to Heidi Wooten Lee and together they have four wonderful children. Michael has served District 9 for two terms in the North Carolina Senate, from 2014 to 2018.

Before we dive into Senator Lee’s amazing accomplishments and his plans for the future, we will address the “elephant in the room.” You might have heard the Marcia Morgan campaign ads and Gov. Coopers blatant false narrative concerning Michael’s position on the Supreme Court’s (Dobbs) Roe v. Wade decision. As Michael has stated “abortion is not as simple as the Far Left or Far Right talking points. I am a Republican, but I do not support an “extreme abortion ban,” as Roy Cooper says, or any ban on abortion in the first trimester. And I oppose any abortion restrictions that exclude exceptions for rape, incest, viability of the fetus, or health of the mother. Justice Samuel Alito wrote of two extremes in the Dobbs decision, 1. Those who favor a total ban on abortion, 2. Those who oppose any abortion restriction, from conception through the ninth month of pregnancy. But there was a third, “Still others in a third group think that abortion should be allowed under some but not all circumstances…” While Cooper and Marcia Morgan blatantly and publicly lie in an attempt to convince you Michael is a member of the first group (a total ban), the truth is he belongs in that third group, “…allowed under some but not all circumstances”.

Now that you know the truth, we will get back to what we initially wanted to share with you.

Senator Lee has worked extremely hard to represent you, the citizens of SD9. While he has accomplished successes on those issues that are most important to you, he realizes there is so much more that can be accomplished. To list all of Michael’s accomplishments that directly impact you as a resident of District 9 would require dozens of pages. We will limit to just some of the extraordinary and significantly impactful highlights.

Economy: Inflation has soared to 40-year highs due to the reckless policies in Washington. In North Carolina, we have chosen a different path. Our common-sense tax and spending reforms have led to budget surpluses that we return to you, the taxpayer.

Education: As Chairman of the Senate Education Committee, Senator Lee has worked hard to make sure that every child has access to a quality education. He wants our education system to be the strongest in the country and believes that starts with excellent teachers. While we have made great progress, he recognizes there is much more that can be done.

Clean Water and The Environment: Clean water and the environment are especially critical issues to our coastal community. Michael has worked extremely hard to make North Carolina a leader in tackling PFAS.

Michael has served as an exceptional advocate for the residents of District 9, and the entire state of North Carolina. As we stated earlier, there is so much more we could have shared. Please to be sure to visit his website at https://www.leefornc.com/ to obtain additional information.

One Final Thing: Please be sure to register. Also make sure you vote. Early voting begins on October 20, 2022, and Election Day is November 8, 2022.