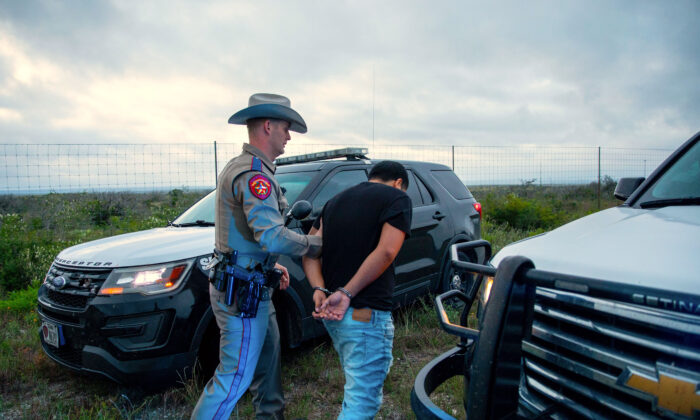 We all have witnessed the chaos occurring at our Southern border. We are all keenly aware that Biden and Harris have done absolutely nothing to address these problems. In fact, their proposed policy agenda will only make this problem much worse than it already is. Biden, through his inaction and actions, has created a national security and health crisis of the highest magnitude. We have authored several articles informing you of the negative impacts this open border and Biden’s catch and relocate policy is having on America.

Charlotte Cuthbertson, Senior writer for the Epoch Times, in an article “Texas Law Enforcement Reports Reveal Scope of the Border Crisis” reveals just how severe the problem is and how it continues to get worse. The following are examples of key points made in Ms. Cuthbertson’s article:

It is no secret that dangerous gang members, drug smugglers, human traffickers and felon fleeing prosecution from other countries are crossing our border daily.  Jan Psaki has openly admitted that most of these illegal aliens are not tested for any diseases.

The Biden administration has given a new meaning to “catch and release”.  Biden has adopted a “catch and relocate” policy. It has been reported that illegals are in the dark of night loaded onto buses or airplanes and relocated to cities across America. To make matters worse, it was revealed by a whistleblower, “the military was flying illegal migrants to different cities.”   Stephen Miller a Republican Senior Advisor, while on the Tucker Carlson show stated that the use of the military is “absolutely not legal.”

Miller also stated, “The Pentagon has confirmed it to us, Spokesman Chris Mitchell described the flights from Laughlin as ‘noncitizen movement’ part of the U.S. Immigration and Customs Enforcement’s mission.”

Miller discussed what he believes are the administration’s true motives behind moving illegal immigrants throughout the country.

“This is a planned resettlement. The largest of its kind, I would suggest perhaps in the history of the world. In terms of the number of illegal border crossers being resettled into the interior of our country in violation of plain law.”

Miller claimed that Biden’s handling of the southern border crisis is an “impeachable” offense. Will Biden be impeached? Certainly not within the next 13 months, but who know what the future holds.

Every American citizen should be outraged by the fact our border is open, criminals and untested aliens are being relocated in your backyards across America. Millions of Americans are uniting to oppose the damaging policies being enacted by the liberal left progressives. Do not you think it is time for you to join the fight. We need to push back, be more vocal, stand as one and restore America First values.

Please take just a couple of minutes of your time to visit our website (newhanovergop.org) click on “Join Our Team” and/or contribute to help us continue the fight. Thanks in advance.

One Loud Voice from Wilmington to Washington