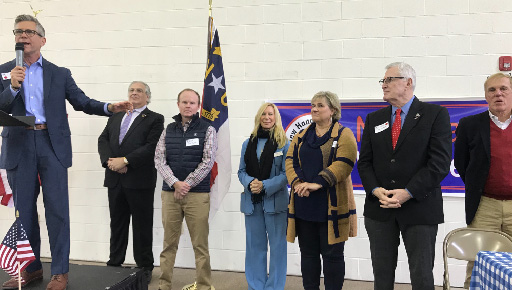 Thank you to everyone who came out to support the March 20, 2021 NHC GOP Precinct Meeting and Biannual County Convention. To those who were unable to make it, let me give a brief recap. The event can only be described as an overwhelming success. It was spectacular event, well attended (SRO) both in person and live-remote. There were over 125 members in attendance and dozens more joined via Zoom. We were welcomed by AJ Daoud, who later officially opened the convention. The members were treated to informational presentations from Representatives Charlie Miller and Ted Davis. In addition, Mike Whatley, Chairman of the North Carolina Republican Party, gave a stimulating discussion on where the Republican Party is today and assured the audience that going forward, we will continue to support “America First” policy agendas. Mike’s discussion generated a loud standing ovation with chants of USA, USA, USA.

Near the end of the Convention Will Knecht, Chairman of the NHC GOP, took to the podium to deliver another inspiring presentation about today’s NHC GOP and his plan going forward. He then presented his “Slate” for Leadership Positions. The following slate was presented to all in attendance:

In addition, Chair Knecht introduced the team members that will be filling the newly created leadership positions that will now position the NHC GOP to be more effective efficient, responsive, and coordinated. The following team leaders and positions were also introduced:

The proposed slate was unanimously approved.

The NHC GOP has recently completed its 2021 -2025 Strategic Plan. One of the goals and objectives is to keep all members routinely informed on issues, upcoming events, and the impacts that current administration policies will have on each of you. To meet that objective, you will be receiving email updates from Will Knecht (countychair@newhanovergop.org) and/or Wayne Gibson (ExecutiveDirector@newhanovergop.org).

We thank you for your continued support of the NHC GOP. Please visit our website New Hanover County Republican Party (newhanovergop.org) for more information on how you can help. Your combined volunteer efforts as well as your financial support will allow us to fight together so we can save the American Spirit and help educate the voting public about what it means to be an American!